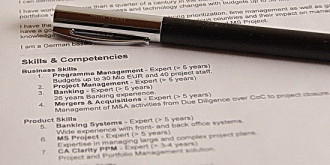 "Thank you for your excellent work [...]. Your support was a key success factor not only in our internal preparation but also ensuring that our partners executed as we expect them to [...]."

"Organized, detailed and dedicated - completes a thorough job from beginning through end."

"Having you with your expertise in the team was all time successfully and very aim-oriented. You are a team player and beside your interdisciplinary expertise, you impress with your eloquent style by bringing complex circumstances to the point and balancing different –sometimes contrary- opinions."

"I would like to thank Michael for his efforts in getting us through to a successful Change of Control."

"I just wanted to send a quick note to Thank You for all your efforts on Project [...], especially the preparation, testing, planning, and implementation of the migration [...]."

"Thank you for all your hard work. We will as always keep you in mind for any future projects.”